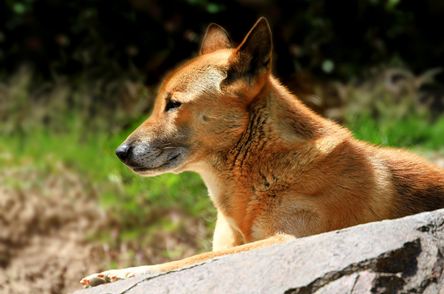 The New Guinea singing dog is also known as the New Guinea dingo, Hallstrom dog, bush dingo, New Guinea wild dog, and singer. Current genetic research indicates that the ancestors of New Guinea dingoes were probably taken overland through present day, China, to New Guinea by travelers during pre- Neolithic times, where today these dogs call home.   The New Guinea singing dogs are named for their unique vocalization. Their howling vocals are characterized by a sharp increase in pitch at the start and very high frequencies at the end.   When in groups, these dogs will â€œchorus howlâ€, when one starts the others follow and is well synchronized.

The New Guinea singing dog is a wild dog with relatively short-legs and broad head. These dogs have an average shoulder height of 12â€“18 inches and weigh 20â€“31 lbs. They do not have rear dewclaws. Their limbs and spine are very flexible, and they can spread their legs sideways to 90 °.   New Guinea singing dogs have erect, pointed, fur-lined ears.   The ears can be rotated like a directional receiver to pick up faint sounds.

The New Guinea singing dogs do not form permanent packs.   They prefer to forage alone or in pairs.   These dogs tend to feed on small to mid-sized marsupials, rodents, birds and fruit. In captive, they thrive on lean raw meat (poultry, deer, boar, chicken).

Female Singers come into heat once a year rather than twice a year, normally associated with domestic breeds.   Her gestation period is 58 to 64 days and she may have a litter size of 1 to 6 pups.   Female Singers are protective of their young and will aggressively attack their male counterpart if they feel he poses a danger to the puppies.