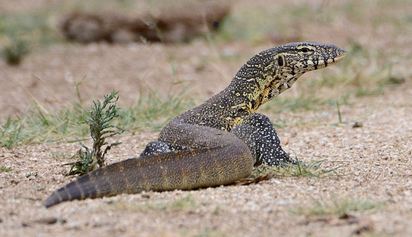 The Nile Monitor are also called Water Leguaan, or River Leguaan, is a large member of the monitor lizard family.   They can grow to about 4â€“6 feet in length with rare specimens exceeding 8 feet.   They have muscular bodies, strong legs and powerful jaws. The teeth are sharp and pointed in juvenile animals and become blunt and peg-like in adults. They also possess sharp claws used for climbing, digging, defense, or tearing at their prey.   Nile monitors have acute eyesight, and are quite capable of distinguishing between people by vision alone. They can see potential enemies, prey, rivals, or mates from a long distance away.   However, their most remarkable sense is that of smell. Their probing tongue picks up scent particles from the air, the ground, or another surface, and presses these against a special organ on the roof of their mouths that analyzes the odors collected. Because the tongue is forked, the two tines can pick up scent gradients, and allow the monitor to know which direction the scent is strongest.

Nile monitors are native to Africa and the species is distributed throughout the entire central and southern regions of the continent, including Sudan and a portion of central Egypt along the Nile River.   They are not found in any of the desert regions of Africa, however, as they are excellent swimmers and thrive around rivers.   In Florida, established breeding populations of Nile monitors are known to exist in different parts of the state.

Nile Monitors feed on fish, snails, frogs, crocodile eggs and young, snakes, birds, small mammals, large insects, and carrion.   They are opportunistic predators and scavengers. They eat nearly anything they can catch and stuff into their jaws.   Their powerful jaws can crush the shells of clams, snails, crayfish and crabs to get at the meat inside.

A female Nile monitor can lay up to 60 eggs in a clutch, and like most other species of monitors, can lay several clutches a year. These eggs are often deposited in termite mounds, but may also be laid in burrows dug in sun-warmed banks or other places with suitable temperatures, humidity, and soil composition. The youngsters hatch in 6 to 9 months and dig their way out. Without parental guidance from the get-go, the hatchlings may hang out in groups while they grow.