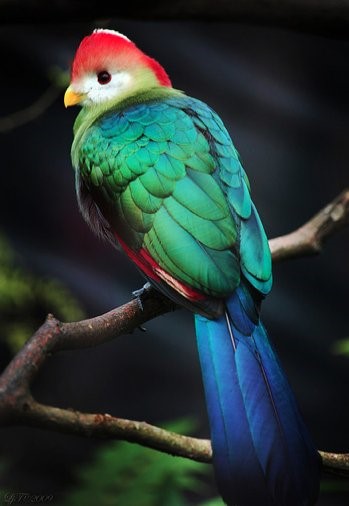 The Red-crested Turaco is a large, colorful, long-tailed regal bird. It is easily identified by its vivid red crest, white face and yellow beak. Eyes are red, and the beak is yellowish-green. Its plumage is overall green. They measure 19 – 20 in (47.5-50 cm) from beak to tip of tail and weigh around 210-325g. Although they are social among the species, they are shy and remained concealed among the branches and seldom come to ground, except for water or food.

The Red-crested Turaco is a fruit-eating bird native to Angola. Their call sounds somewhat like a jungle monkey.  Its preferred habitats are woodland and forestry where it can feed on available fruits.