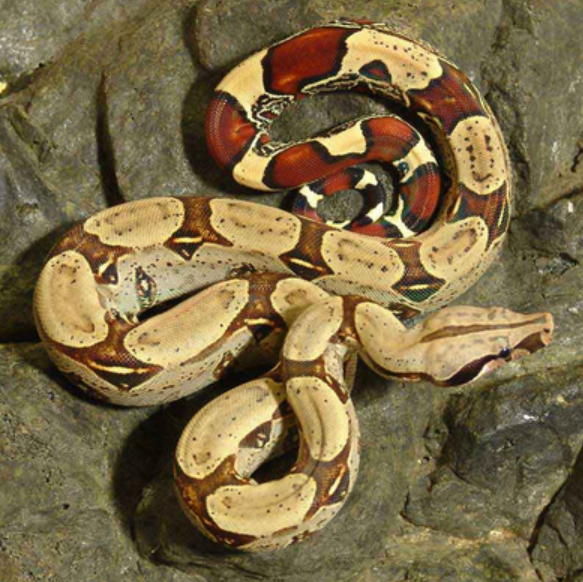 The red-tail boa is distributed from the Amazonian forests of Colombia to northern Argentina. It is very polymorphic and reaches an average size of six and a half   to ten feet. The disposition of the red-tail boa and its beautiful coloration has made it a popular species in the pet trade and it is regularly bred in captivity

Captive red-tail boas most commonly mate from November to February and give birth in July or August. In the wild however, this varies quite a bit according to region. Boa constrictors give birth to live young as do 30% of the world\’s snakes. Gestation is from four to eight months. Neonate red-tails are about one foot long when they are born and their first meals consist of small warm blooded animals such as mice or young birds. Red-tail boas are one of many species of snakes that use the method of constriction to kill their prey. Within seconds after seizing its prey with its needle sharp curved teeth, the boa quickly wraps a portion of its body around the animal. Each time the prey exhales, the coils of the snake tighten putting pressure on the circulatory system and preventing expansion of the lungs. In a short time the animal dies from asphyxiation. Like other snakes the red-tail boa is able to swallow food items that are much larger than its own head. This is because the bones of the lower jaw are not attached to the skull. The elasticity of the skin, ligaments, and muscle allow the snake\’s mouth to stretch around a large prey animal as the jaws alternate grabbing and pulling the prey into the throat. Muscle contractions then move the food down to the stomach. There are about 3,700 known species of snakes and it is likely that there are quite a few more that are yet to be identified. The red-tail boa in all of its variations is a truly beautiful and fascinating creature.