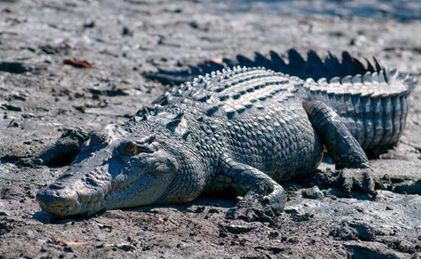 The Saltwater Crocodile is also known as the estuarine or Indo-Pacific crocodile.   Historically, this species was found in southeast Asia, but now are extinct in this region. Today, they are found primarily in India, Australia and New Guinea.   The saltwater crocodile population in Australia is estimated at somewhere between 100,000 and 200,000 adults. The saltwater crocodiles inhabit freshwater swamps and rivers and sometimes traveling far out to sea. Crocodiles compete fiercely with each other for territory.

Generally the saltwater crocodiles are very lethargic â€“ a trait which helps it survive months at a time without food â€“ they typically loiter in the water or basks in the sun through much of the day, preferring to hunt at night.   The saltwater crocodile is an opportunistic predator, capable of taking nearly any animal that enters its territory, either in the water or on dry land. Some animals they prey on are monkeys, kangaroos, wild boar, dingos, snakes, turtles, goannas, lizards, amphibians, water buffalo and even sharks.   Humans and any type of domestic livestock or pet may be taken opportunistically as prey.

The female selects the nesting site and both parents will defend the nesting territory, which is typically a stretch of shore along tidal rivers or freshwater areas. The nest is a mound of mud and vegetation, usually measuring 69 inches long and 21 inches high. The female typically lays from 40 to 60 eggs but some clutches have included up to 90.   Although the female guards the nest for 80 to 98 days, the loss of eggs is often high due to flooding and occasionally to predation. As in all crocodilians, sex of the hatchling is determined by temperature, with relatively low temperatures producing mainly females and high temperatures producing mainly males.